Skip Schumaker was definitely a fan favorite here in St. Louis especially with the young fans. I am very happy to report that he had a landed a front office job with the San Diego Padres. He deserves it. Here is the article written by Dennis Lin of The San Diego Union Tribune….

Skip Schumaker spent less than a month in the Padres’ spring-training camp before he decided to retire from an 11-year playing career. Similarly, his time away from the organization did not last long.  The Padres on Wednesday announced the hiring of Schumaker as an assistant to baseball operations and player development. Manager Andy Green said Schumaker already had delved into his new role in the front office. “He’s a high-character, high-quality guy that’s already been out seeing our drafted guys, and he’s been out to Double-A,” Green said. “He’s making his rounds in the organization, trying to offer his insight to different levels. It’s a nice way to keep him involved in the game.”

A well-regarded veteran in the latter part of his career, Schumaker hit .278 over stints with the Cardinals, Dodgers and Reds.

In February, the Southern California native signed a minor league deal with the Padres. In early March, he retired with little fanfare. Though a welcome clubhouse presence, he told Green he did not want to cost a more deserving player a job.

Schumaker’s re-entry into baseball will allow him to assist in other ways.

“I think everybody here has a profound respect for him,” Green said. “We’re excited to have him around.”

Today on MLB Network John Manuel reports that the Cardinals may bring up Alex Reyes in the second half of the season as a starter or a bullpen pitcher since the Cardinals do have some pitching questions. The Cardinals view him as an impact pitcher with a fastball in the upper 90s and a electric breaking ball with a swing and miss pitch. He is a must bring up prospect that could help the Cardinals going into the playoffs.

Some other good news for Alex Reyes was that he was selected to the SiriusXM All-Star Futures Game, which will be played in San Diego during All-Star festivities.

He is a part of the World Team roster and will go up against the U.S. Team on Sunday, July 10 at 6 p.m. (CT) on MLB Network. Reyes is part of a World Team that includes players from 11 countries and territories outside the United States.

An undrafted free agent, Reyes is in his fourth season as part of the Cardinals organization and first at the Triple-A level. He was named the Cardinals Minor League Co-Pitcher of the Year in 2015 after striking out 151 in 101.1 innings between three levels and holding opponents to a .197 batting average.

With having sixty two professional starts, Reyes is 20-18 with a 3.27 ERA and has fanned 404 in 300 innings. With Memphis this season, Reyes has seven times and is 2-0 and holding the opposition to a .227 batting average.

The St. Louis Cardinals announced prior to tonight’s game that they have activated switch-hitting catcher Brayan Pena (left knee surgery) from the 15-day disabled list and designated catcher Eric Fryer for assignment.

Pena, 34, who underwent left knee surgery the first week in April, had missed the first 75 games of the 2016 season.   He batted a combined .192 (10-for-52) in 14 games between Memphis (5 games) and Springfield (9 games) during his injury rehabilitation assignment.   Pena made nine starts at catcher and two at first base during his rehab assignment.

Pena, who wears no. 33, will be in uniform for tonight’s series finale at Kansas City. 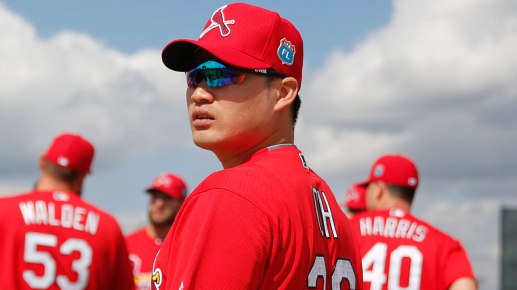 Well, it looks like the Cardinals have a problem with their closer Trevor Rosenthal. So far this season he has a 5.63 ERA and in 4 innings he’s walked 21 batters, all unintentionally, and opposing hitters have an OBP of .429. More to the point, he’s a closer who this season has on average allowed more than two base-runners per inning. So what is going on with Rosenthal? Well part of the problem is his lack of control, hitters are swinging at his fastball roughly 10 percent less often than they were in 2015. When they do swing, though, they’re doing damage: opposing hitters have an average of .338 and a slugging percentage of .471 against Rosenthal’s fastball, which is a pitch he’s going to almost 80 percent of the time this season. No longer in awe of his fastball, they’re not biting on his changeup (swing rate also down roughly 10 percent), and they’re swinging less on everything out of the zone, which are the pitches that often get whiffs or weak contact.

Today the St. Louis Post Dispatch reports that Mike Matheny met with Rosenthal on Saturday to let him know that he will be taking a break from closer. It looks like that that Matheny will use a small committee to close, the three pitchers would be Jonathon Broxton, Kevin Seigrist or Seung Whan Oh………..all I can say to this is please don’t do this Matheny. The Cardinals brought Oh here for a better reason than to be a set up guy. For heaven’s sake in Korea they called him The Final Boss for a good reason. This season Oh has a 1.66 ERA and a 6.38 K/BB ratio in 37 games. Oh has the stuff to thrive in the role. Oh’s fastball has a bit better than average velo, and his hard slider has strong 12-6 movement, which makes it a weapon against the opposite side.He needs to be the Closer right now, come on Matheny give him a chance. 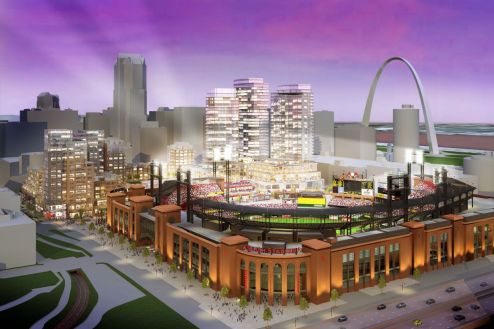 Some details of possible new development at Ballpark Village are getting out.

The information comes from a solid source: Bill DeWitt III, president of the St. Louis Cardinals.

In remarks Thursday evening at the Post-Dispatch’s Top Workplaces event at the Joule event venue in Lafayette Square, DeWitt provided an update on future plans for the second phase of Ballpark Village.

He said the desire is to break ground next year on development of 280 to 290 residential units, office space, a hotel and more retail space.

Ballpark Village’s first phase, the complex of restaurants and bars next to Busch Stadium, opened in 2014. The rest of the site is a parking lot. The Cardinals and Cordish Cos. of Baltimore are co-developers of Ballpark Village.

DeWitt has spoken frequently about his desire to build a mixed-use project at Ballpark Village. He has had in his office a site plan of the 10-acre site. He’s said Ballpark Village has three good sites for office buildings plus room for a hotel and a tall, thin residential tower without blocking views of the Arch from inside Busch Stadium.

When such buildings might go up remains anyone’s guess.

I love the All-Star Game due to fond memories of me and my dad watching our favorite players from around the AL and NL Leagu get together to have some fun. When I saw the list of ex-Padres players that will be signing autographs, doing clinics, Q&A, and other fan related fun I was giddy with excitement but sad that I couldn’t be there. Here is the schedule for the above I have mentioned…… 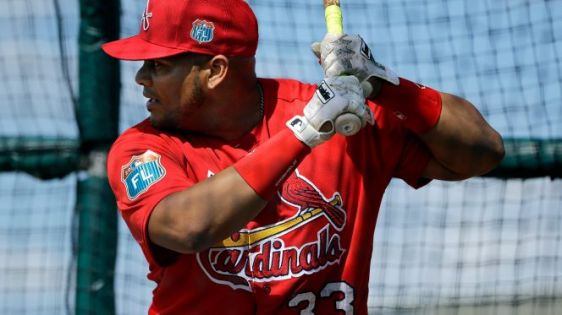 Brayan Pena is now getting closer to the end of his 20 day rehab with the Springfield Cardinals. He has missed the entire season so far with a knee injury that required surgery, was supposed to give the Redbirds a threatening bench bat and a serviceable backup who would allow starter Yadier Molina to take more days

. It will be more than likely that the Cardinals will part ways with veteran backup Eric Fryer. The 30-year-old Fryer has been great in a very limited role with St. Louis, hitting .406/.457/.469 in just 35 plate appearances. The hard part is what to do at this point. Would the Cardinals keep Fryer anyway and bring up Pena? If they do they would have to send down Greg Garcia. With Pena having a two year contract he needs to be on the 25 man roster despite his horrible batting line while in the minors. A decision will need to made by the All-Star Game

Our mission:- . Increase participation and interest in baseball and softball among under served youth • Encourage academic participation and achievement • Teach the value of teamwork . Working towards Major league baseball. We are asking for an assistance in the area of equipment either new ones or fairly used ones because the availability of baseball equipment is one of the major factors affecting the game here in Nigeria.. We are not financially buoyant to purchase this equipment. We are in needs of your support of:- *Gloves/mitts *Catcher’s Mitt *Baseballs & Softballs * Tennis Balls *Bats *Baseball cleats *Baseball hats/visors *Uniforms (shirts,workout shirt, pants, belts, and socks) *Batting helmets *Catcher’s equipment *batting gloves *Baseball tees/stands *Bases *Pitching Rubbers *Equipment bags *Trophies *Pitching machine 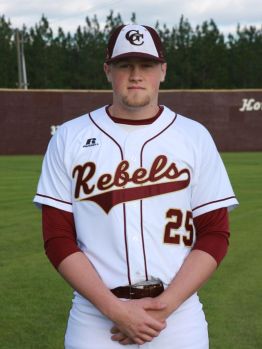 The St. Louis Cardinals announced today that they have agreed to terms with six players on minor league contracts, including their 2016 fifth round selection (166th player overall) Walker Robbins, an outfielder from George County (Miss.) High School.   The team also announced that they have come to terms with draftees Stefan Trosclair  (20th round) and Noel Gonzalez (29th round).  In addition, the team has added non-drafted free-agent pitchers Keaton Siomkin, Colton Thomson andRoss Vance.

The team announced yesterday that they had reached agreements with 20 players, including first round selection (33rd overall) Dylan Carlson.

The St. Louis Cardinals announced prior to today’s game that they have recalled outfielder Tommy Pham from Memphis (AAA) and optioned outfielder Randal Grichuk to the triple-A club.

Pham suffered a left oblique injury on Opening Day (April 3) at Pittsburgh, taking just one at-bat, and was placed on the disabled list the next day.  He was activated from the disabled list on May 17 and optioned to Memphis.